This is a common business scenario, but it doesn’t need to be. Digital whiteboarding unifies and clarifies projects, and it’s not just for remote teams: the same processes that apply to making remote groups cohesive should apply for in-person teams. Every type of group can benefit from solutions that visualize and preserve ideas, which is why digital whiteboarding can be so helpful. 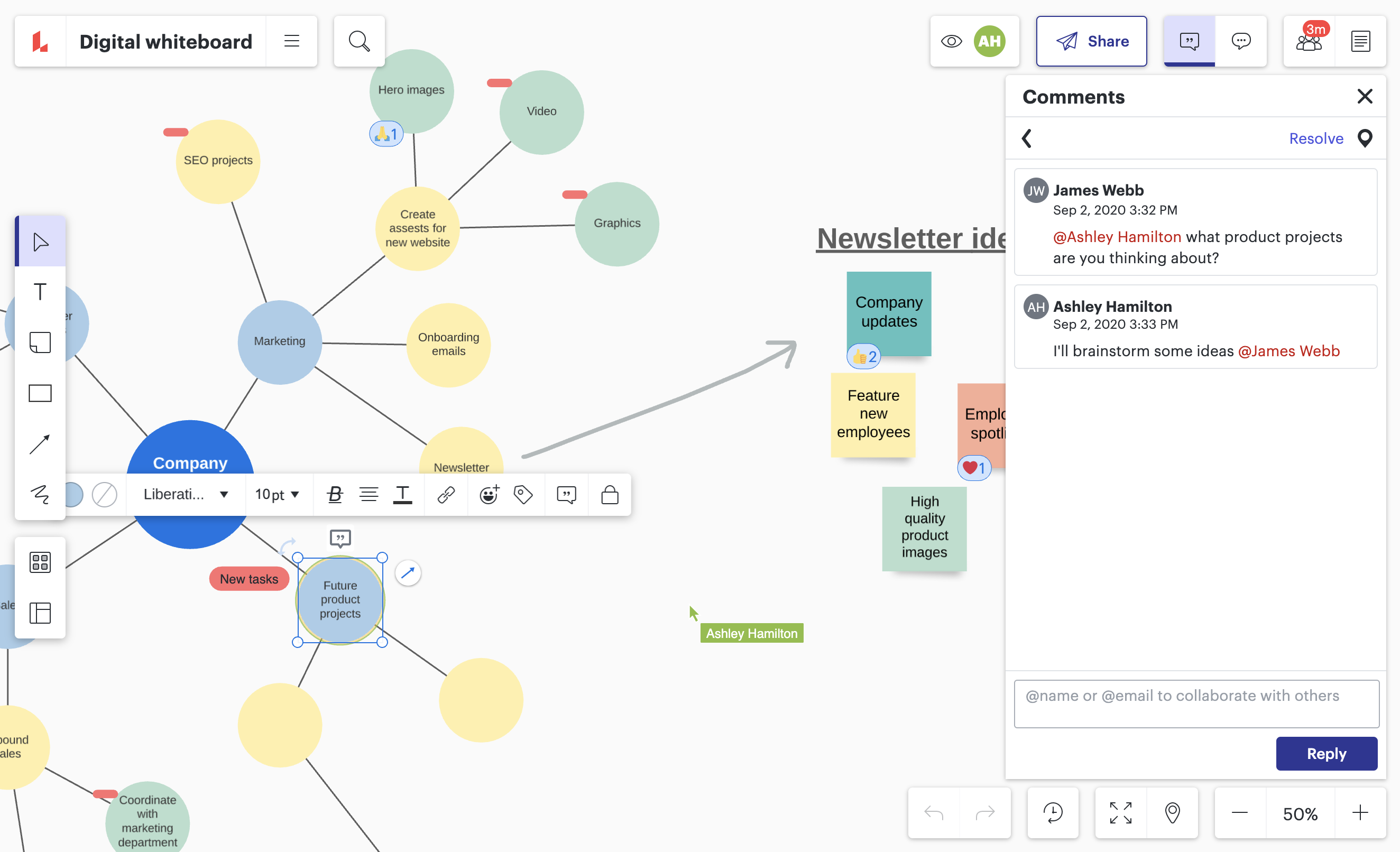 Here are 9 compelling reasons why digital whiteboarding is about to become your new best brainstorming friend.

1. It drives engagement from every meeting participant

Online whiteboards make participation compulsory. After all, it’s obvious when members of the group aren’t participating because everyone’s looking at the same software, so it’s not as easy to opt out of contributing.

During in-person meetings, some members of the group might dominate the conversation and other members might mentally check out of the meeting altogether. Using a digital whiteboard solves that: each member of the team can be assigned a color, so it’s immediately apparent which contributions are made by each person. Having this visual confirmation of how each person has contributed provides an incentive for better engagement. And if a particular member of the team is dominating the conversation and the contributions, that’s apparent, too. It makes for a more equitable experience, which means all voices are encouraged to participate.

2. It creates a single source of truth

In the scenario above, each participant had their own interpretation of the landing page. That led to disparate understandings of the finished product. A digital whiteboard ends the confusion. Instead of having each person make their own notes, a digital whiteboard creates a single record. The finished product stems from the same source, which means everyone is on the same page throughout the project.

The solution for most in-person meetings is to either have everyone take their own notes, assign a notetaker for the group, or just keep notes on a stack of sticky notes that are then written up and sent by email to the group. Each of those methods is problematic and inefficient.

A digital whiteboard, on the other hand, is accessible to everyone instantly. Plus, updates are made in real time. This alleviates the responsibility from a single note taker who may interpret something in the meeting incorrectly or omit an important point. And a digital whiteboard can be accessed on myriad devices, which is great when notes need to be accessed while traveling.

4. They allow for versioning

Manual whiteboarding is static. As the product evolves, it’s difficult—and often impossible—to consult previous versions of brainstorming sessions or wireframe versions or initial ideas. That means value can be lost as the project progresses. But a cloud-based whiteboard allows for the preservation of version after version, making it easy to consult previous iterations and carry certain elements from version to version.

Picture this: your team has just completed a stellar brainstorming meeting for your new project name. The ideas were genius, and they’re all there on the whiteboard in the main meeting room. The VP of Marketing says she’ll take a picture of the whiteboard and send it to everyone. But she forgets to take the picture. And the next team in the meeting room erases your ideas.

It’s an all-too-common scenario, and it’s easily prevented with a virtual whiteboard. A cloud-based whiteboard can’t be deleted easily, and if it is accidentally deleted, it can simply be recovered.

6. It allows for participation from remote team members

It’s likely your team consists of remote team members, and those remote teammates usually have a more difficult time participating in meetings. They often can’t see the whiteboard, and since it’s natural that priority is usually given to in-person participants, remote team members have a hard time bringing attention to their ideas. It can be exhausting to try to get someone to listen to them, and they can’t physically contribute to a non-digital whiteboard. More often than not, these valuable remote team members give up and let the in-person team members dominate the meeting.

An online whiteboard brings remote team members back into the fold. They can contribute to the whiteboard directly, and their contributions are seen immediately by the rest of the team. This helps them feel valued, and it improves collaboration and teamwork.

7. It makes soliciting feedback much easier

Gathering buy-in from stakeholders is difficult when they can’t immediately understand what the team is talking about. They can’t visualize wireframes or processes from meeting notes alone, and they’re more hesitant to approve something that’s been cobbled together from sticky notes. And when they need to provide feedback on what the team has proposed, they are left to email threads or verbal feedback that can be unclear and difficult to share.

With a digital whiteboard, stakeholders are given a link to the whiteboard itself. They can easily comment on any aspect of the whiteboard, and tasks can be assigned from that feedback within the whiteboard. It’s a clear process that makes everyone’s job easier.

After an in-person whiteboarding session, it’s often up to a project manager to assign tasks. In lieu of a project manager, team leaders usually assign tasks through email after the meeting, which is an inefficient means of handling next steps. Worse, tasks can not be assigned at all, and all the ideas generated in brainstorming never go anywhere.

A digital whiteboard prevents next steps from being forgotten. Team members can be tagged within the virtual whiteboard so they know what to work on, and responsibility is shared with the entire team instead of relying on a single person to distribute tasks. Digital whiteboards keep the process moving. There’s no question of what next steps are and where the team is headed next.

9. It increases a sense of ownership

When everyone has contributed to a meeting and there’s immediate, visual proof of that contribution, team members are more likely to take ownership of, and pride in, a project. They’re invested because they feel they’ve contributed to the task—and everyone else can see those contributions thanks to every team member having their own color on the digital whiteboard. That simply doesn’t happen when one person is in charge of writing everything down. Ownership can be a powerful catalyst for generating great ideas and providing momentum throughout the duration of the project.

Virtual whiteboarding is the solution for the future of collaboration. It’s an inclusive way to gather feedback, solicit buy-in, assign tasks, and increase ownership among team members. If there’s confusion, it’s easy to consult the whiteboard, and it’s much easier to make sure everyone’s on the same page when they’re looking at the same thing. 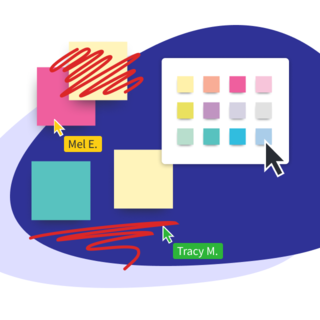 Try out these 4 group brainstorming techniques to set your team up for success.

Check out these 4 group brainstorming techniques in your next session.