How to prioritize tasks with an Eisenhower Matrix

If you’ve ever found yourself paralyzed by how many things you need to get done, you’re not alone. We’re bombarded by tasks,and it can be overwhelming to try and sort through them. And there’s no worse feeling than realizing you prioritized the wrong task and are now scrambling to get something urgent done immediately.

There’s an elegant solution that may just solve all your prioritization woes. The Eisenhower Matrix, also referred to as the Urgent-Important Matrix, helps you decide on and prioritize tasks by urgency and importance, sorting out less urgent and important tasks that you should either delegate or not do at all.

It’s a systematic way to approach your daily life, but it’s also a clever tool to use when you’re a project manager or have any other role that requires prioritizing, organizing, or delegating a large number of tasks.

We’ll walk you through how to confidently use an Eisenhower matrix to organize your work life.

What is the Eisenhower Matrix?

The Eisenhower quadrant is a grid consisting of four squares:

1. Important, but not urgent

These are your longer-term goals. You may, for instance, want to someday own an authentic 1970s roller disco. But that doesn’t need to get done today or tomorrow.

These are the tasks that should demand your attention. They’re important tasks that maybe you didn’t foresee or were leaving to the last minute. These tasks can be divided into further priority, with some being rescheduled if you don’t have time to address all of them right now. You may also wish to delegate some of these items if they need to get done right away.

3. Not important or urgent

Just because something is urgent for someone else doesn’t mean that it needs to be urgent for you. If an item is not important and not urgent, drop it from your to-do list. This square is nice because it allows you to pinpoint things you can stop worrying about.

4. Urgent, but not important

This square is the home of last-minute online warehouse sales. You’ve spent a lot of money on this square. These tasks are simply not important. Ask yourself if the task is a dependency or if it can be delegated or rescheduled.

Where did the name come from?

Eisenhower was well-acquainted with principles of urgency and importance. During WWII, he served as the Supreme Commander of the Allied Expeditionary Force in Europe and successfully launched the invasion of Normandy. Eisenhower is the president responsible for America’s interstate highway system and for helping guide the U.S. through the Cold War.

To say he was busy is an understatement. Eisenhower developed the concept behind the Eisenhower Matrix when he was serving as a General for the U.S. Army, and he continued using it throughout his presidency.

If the Eisenhower matrix seems familiar to you, it may also be because Stephen Covey popularized the concept in his book The 7 Habits of Highly Successful People. It’s important to note that Covey did not come up with the idea–he simply refined it.

How to use the Eisenhower Matrix

An Eisenhower matrix template will guide you through which tasks belong in each square.

Urgent and important tasks go in the first square, then next to it are important but not urgent tasks. In row two, you have urgent, but not important tasks, and then finally tasks that are neither urgent nor important.

Once you have your tasks assigned to each square, here’s what to do:

Tips when using an Eisenhower Matrix

List all tasks first before deciding worth/sorting. Don’t try to sort as you go; that will actually stress you out even more. Instead, do a “brain dump” of all the tasks you feel need to get done. Just make a list, and don’t edit it. Once that list is complete, go back and sort/prioritize each one.

Limit yourself to only a few tasks per quadrant. If you pack your Eisenhower matrix to the brim, you’re likely to become paralyzed by having too much to do. So keep it limited and keep it specific.

Include personal as well as business tasks. If you’re a project manager, this tip won’t apply to you, as you’ll likely be figuring out how to prioritize your work tasks. But the Eisenhower matrix works for nearly every scenario, from sorting out the tasks you need to perform before your next camping trip to preparing for a career change.

And you don’t need to keep your Eisenhower matrices siloed in just work or home: you may find that utilizing them for a combination of all the tasks you need to do is the right way to bring clarity to your work and home life.

Keep your list visible and accessible. So you’ve taken the time to write down all your tasks, sort through them, and then prioritize them. And you’ve left the matrix on your work computer. That’s not going to do you any good. The best way to utilize an Eisenhower matrix is to have it stored in the cloud so you’re never left wondering what was next on your to-do list.

And when you use Lucidspark, you can access your Eisenhower matrix from any device, which means never having to try and remember your work. Plus, with Lucidspark, it’s shareable with a click, so you can easily delegate tasks. And everything is updated in real time, so if you make a change, everyone sees it instantly.

Carrying tasks in your head can feel like an insurmountable burden. The Eisenhower matrix removes that burden and alleviates stress. You won’t have to worry that you’re focusing on the right things or fear that things won’t get done. Instead, you’ll know that you’ve prioritized the most important, most urgent things and can delegate the appropriate tasks to your team. By knowing what’s really crucial, you can feel more in control of your approach to your everyday tasks and focus more on quality, not organization. 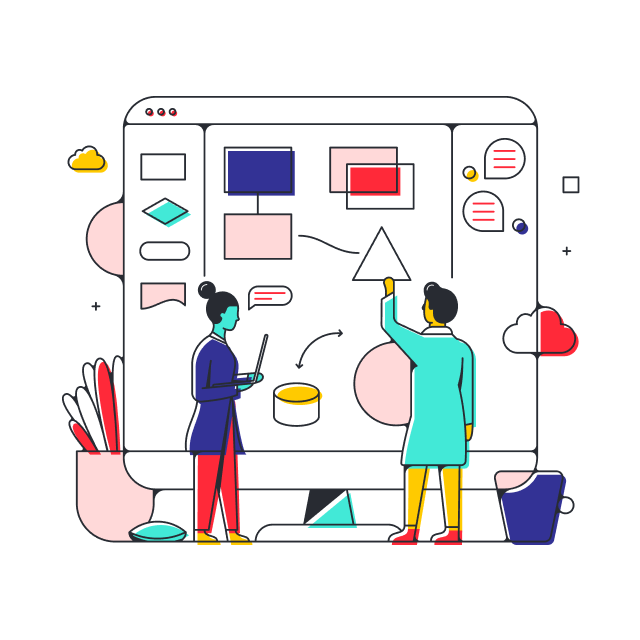 Level up your project planning today with resources from Lucidspark.

Level up your project planning today with resources from Lucidspark.

How to conduct a strategic planning session in Lucidspark