Getting a large group together is great when a few speakers want to disseminate information to an audience. But give a large group a task, and suddenly chaos ensues.

Enter the beauty of small groups. Using Lucidspark, these lean teams can accomplish more in less time. Even if you don’t have the option of working with a larger team, a small group may actually be more beneficial to your goals. We’ll explain why smaller groups are the key to performing more in less time and give you six ways to harness the potential of teams of every size.

Why work in small groups?

Reducing the number of people contributing to group work reduces complexity. This is due to something called the Ringelmann effect, which says that there is an inverse relationship between the size of a group and the extent of individual contributions to the task. Ringelmann was a French agricultural engineer in the early 20th century who discovered that having one person complete a task—in this case, pulling a rope—meant that person was contributing their whole effort. As more people pulled the rope, each person contributed less effort, and the group became increasingly inefficient.

The Ringelmann effect demonstrates a loss of motivation in a group setting. That causes things like freeloading (allowing others in the group to do the work) and each person contributing fewer ideas to the task.

According to the Ringelmann effect, a larger group is simply inefficient. And we see examples of that inefficiency all the time in government and in enterprise businesses. Consider the streets of Los Angeles. They haven’t been maintained in so long, that going too quickly down the wrong street means encountering a pothole that could total your car. A pothole is an easy thing to fix, but when the city of LA is tasked with a small repair, it necessitates measurements, bids, voting, environmental impact studies, permits, road closures, negotiations, and a whole host of bureaucratic nightmares. The result has been decades of worsening streets.

Compare that to a small group in Portland that was so fed up with their own potholes that they decided to learn how to patch asphalt and began repairing the potholes one by one overnight. Bypassing the large “team” meant increasing efficiency—and fewer potholes.

A smaller group communicates faster, but still has multiple viewpoints. With a smaller team, each member has a higher likelihood of being heard while retaining the benefits of having the various skills and abilities of disparate people. Brainstorming is still effective in a smaller group and productivity increases because when people feel their individual contributions are valued, they’re more likely to put in greater effort.

Ready to create your lean teams? Lucidspark is brilliant for breakout groups. Here are six tips for giving your small groups the tools they need to rock:

According to the Ringelmann principle, to increase the efficiency of your group, you’ll need to reduce the size of your group. You can use that by using Breakout Boards. Breakout Boards are similar to breakout rooms in Zoom. A large group can meet on the main Lucidspark board, then the meeting facilitator can create Breakout Boards for the small groups.

First, establish a clear, concrete task for your small group to complete. This is paramount to the success of your activity: every member of the team should have a solid understanding of what their objective is. It’s helpful to write this objective at the top of the Breakout Board to prevent the brainstorming session from going off track. Then, dismiss teams to work on their individual Breakout Boards. Breakout Boards help keep everyone organized, and they maximize efficiency.

Ringelmann discovered that the more identifiable input was, the more effort was generated by individuals. That means when ideas are publicly assigned to their creators, the quality of ideas will increase. That’s why assigning Collaborator Colors is so important. If your color is green, for instance, you’ll naturally be motivated to make sure green is represented on the Breakout Boards. Collaborator Colors keep the group motivated, clarify participant contributions, and keep everyone organized.

Pressure follows the Goldilocks rule: too much pressure means teams are too stressed to perform. Too little pressure means nothing gets done. But the right amount of pressure helps provide structure and keep small groups focused. Each Breakout Board can have its own timer, so you can assign a set amount of time, and give them the autonomy to control their group timer.

There are two ways to utilize voting here. First, each Breakout Board can have its own voting session. You can instruct your smaller groups to vote on the ideas they like and then add them to the main board to be presented to the larger team.

From there, the larger group can use Lucidspark’s voting functionality to quickly poll the group and decide on the best ideas and the next steps to take. It’s a fast, fun way to narrow down the best of the best. 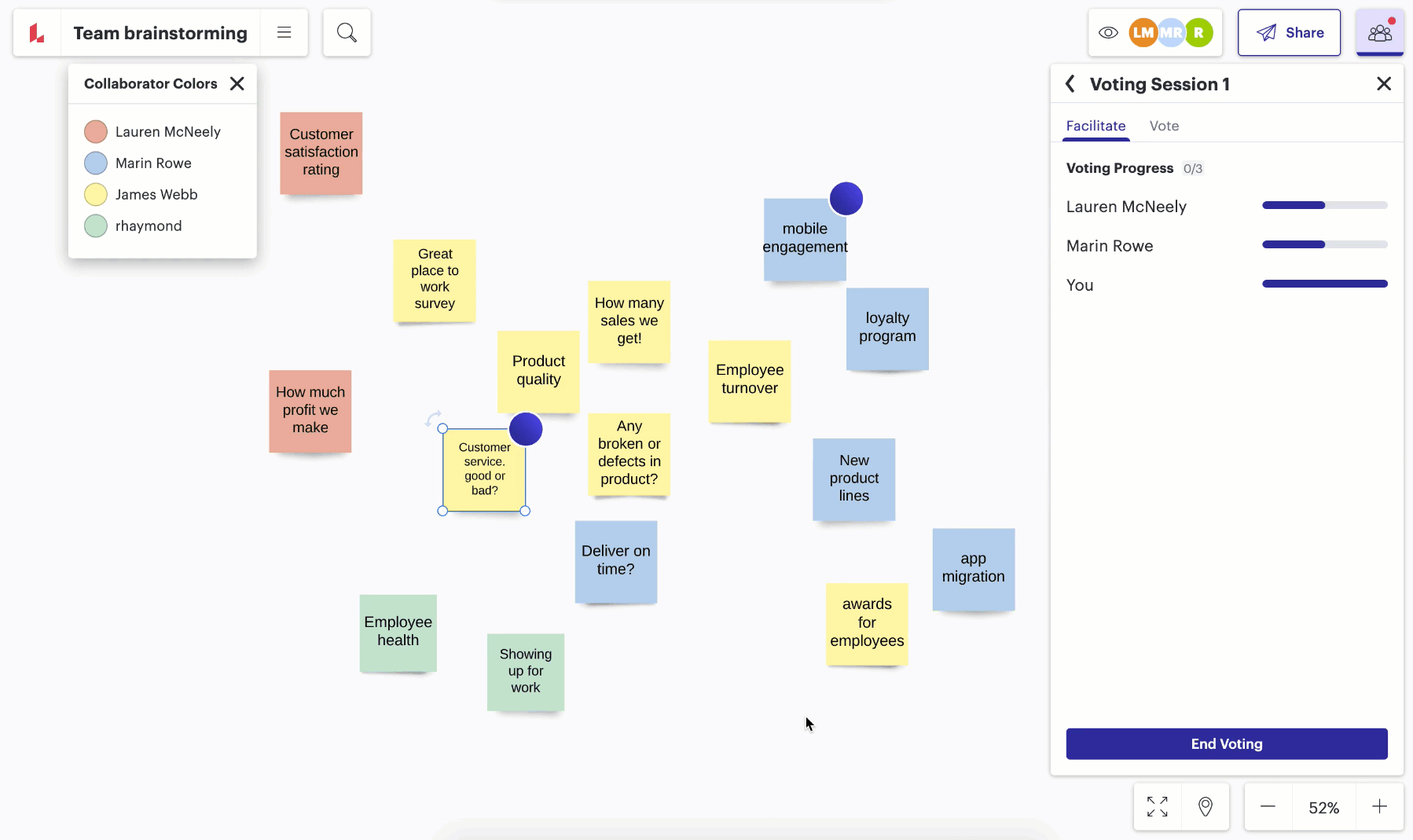 5. Present ideas to the larger group

Individual small groups can bring other meeting participants to their Breakout Boards to present and discuss their ideas. This is great when each smaller group has been given a distinct problem to solve. 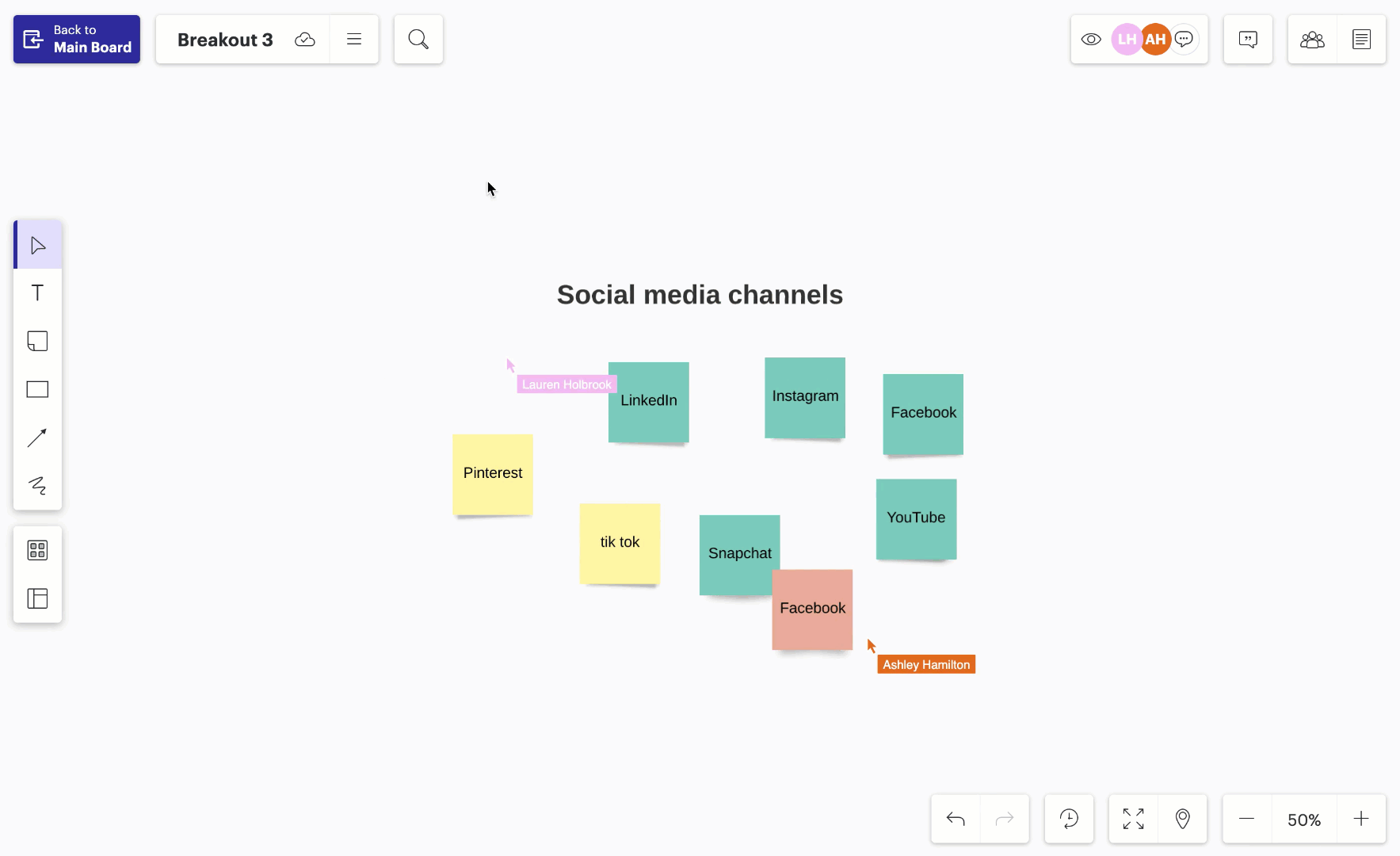 6. Synthesize ideas on the main board

The meeting facilitator can move between boards to keep track of each group’s progress and then call everyone back to the main board. Pull relevant work from individual Breakout Boards onto the shared main board.

Large teams are a necessary part of most businesses, but small groups can be ridiculously effective. The problem is that, until Lucidspark, it was difficult to transition from a larger group setting to a smaller breakout group without relying on multiple solutions that added needless complexity and inevitable technical problems. With Lucidspark, facilitating small groups is much more efficient. And it was designed to be used by in-person, remote, or hybrid teams.

People simply function better in small groups. They feel more valued, more motivated, and more inspired. Breaking up your team into smaller groups also helps you identify individual strengths and weaknesses, and your business will gain new appreciation for the ingenuity of its employees. The more comfortable your business becomes at facilitating small groups, the faster it can solve problems and come up with ingenious ideas to build business value. Incorporate Breakout Boards into your next team meeting and begin experimenting with the agility of small groups.