To mock-up or not to mock-up. That is the question on many UX designers’ minds these days.

Today’s Agile design landscape has prioritized fast and flexible over the sometimes painfully rote steps of past framework darlings like Waterfall. And low-fi mock-ups could be considered an unnecessary extra step in the process from idea to final product.

So why not just skip straight from wireframes to prototypes? Although low-fi mock-ups are an “extra” step, they can ultimately save you time, money, and effort, making them a natural winner in the Agile process.

In other words, don’t count them out just yet.

Read on to learn what low-fidelity mock-ups are, where they fit in Agile design, and how they can streamline your process and enhance your final deliverables.

What is a low-fidelity mock-up?

First things first: What exactly is a low-fi mock-up?

UI and UX designers use multiple visualization and planning tools to iterate on their design ideas. The three basic levels of visual outlines are:

Each outline builds on the one before it.

These visualizations can be low-fidelity (low-fi) or high-fidelity (high-fi). Low-fi and high-fi refer to the amount of detail or functionality included in the design outline. Low-fi means less detail and little or no functionality. High-fi means greater detail and functionality (such as color, basic copy, font, and even clickable navigation).

Wireframe vs. mock-up vs. prototype

Wireframes are typically the first step in the design process. Low-fi wireframes are basic blueprints that outline the general structure, contents, and functions of a page or application. Wireframes are a valuable brainstorming tool for designers to work out their ideas on paper (or a digital whiteboard) and sketch a simple outline to start moving in a conceptual direction.

Mock-ups are the next step up from wireframing. Where the wireframe is a skeletal outline, a mock-up adds visual detail and design. Unlike a prototype, however, a mock-up usually doesn’t include functionality or interaction. Rather, the goal is to get the initial details visualized so designers and stakeholders can see what the product might look like before taking the time to add functionality and more detail.

Prototypes are an advanced stage of design iteration. Prototypes are an early model of the product and usually have functionality and interaction to test the design. This step allows developers to see how their model would work in the real world and identify any issues to fix before delivering a final product.

The short answer: No.

But why not just skip ahead from wireframe to prototype? It’s a question lots of designers have wrestled with as the industry moves away from Waterfall to more Agile approaches.

Waterfall focuses on a strict iterative process that essentially requires that each step (including wireframing and mock-ups) is completed before moving on to the next. With Agile, iteration and collaboration are ongoing—and that allows room for flexibility within the process. This has led some to argue for design that dives into prototyping more quickly.

However, skipping ahead could leave you and your design team in the lurch if you invest time and effort to design and build a prototype that needs heavy reworking. A mock-up gives everyone a chance to visualize the options and identify potential issues before investing in a functional model.

In other words, a mock-up helps your team move with greater agility to address issues early and adapt quickly along the way—ultimately saving time and money and producing a prototype that is more aligned with the needs of your users and your stakeholders.

The value of low-fidelity mock-ups

If mock-ups aren’t dead, what can they do for us? Here are just a few benefits to including low-fidelity mock-ups in your iterative process.

Save time and resources

As we mentioned above, one of the biggest advantages of including a mock-up in your design process is that it can save valuable time and money. By visualizing basic details, navigation flow, and proposed functionality before programming a full prototype, developers can evaluate the concept and get feedback from key stakeholders.

That way, if there are issues or stakeholders want to make a change, it’s easier (and cheaper) to pivot before the ideas are fleshed out in a prototype.

If designers skip the low-fi mock-up and jump straight into creating high-fidelity mock-ups or prototypes, they risk spending a lot of time on an idea that other stakeholders haven’t bought into yet.

Agile design relies on a continual feedback loop. Low-fi mock-ups play an important part in the iteration stage, allowing designers to present several ideas at once and remain responsive to feedback.

Skipping straight to prototyping narrows that feedback window and locks teams into one version of the concept. Integrating a mock-up stage in your design process helps your team receive and incorporate feedback efficiently so you don’t have to back-track significantly.

Low-fi mock-ups are the natural progression from wireframing to prototyping, allowing UX designers to build on ideas while continually adapting to feedback along the way.

When you include this step in the iterative process, you ensure the project moves forward smoothly. If you were to jump into a hi-fi mock-up or prototype too soon, any issues or major shifts in the design requirements (that would have been uncovered in a low-fi mock-up) could throw off your project momentum, costing valuable time and causing frustration for your team.

Mock-ups include more detail than a basic wireframe, so they leave less to the imagination. This allows stakeholders to more easily visualize and understand what the final product might look like so they can offer more specific feedback and direction.

Plus, you can create low-fidelity mock-ups in minutes—especially with the help of visualization tools like Lucidspark. Quick mock-ups means you can iterate quickly and responsively.

User flows are the path a user takes to complete a task or achieve a goal within your interface or application. In other words, user paths are your roadmap, plotting the user experience from Point A to Point B.

Mock-ups help designers and stakeholders visualize this roadmap and understand the intended path a user will take, spot obstacles or issues with functionality early, and reduce the number of questions so they can create a design that streamlines the experience.

Low-fi mock-ups are a great way to stimulate collaboration at all levels—including non-technical stakeholders. Low-fi mock-ups don’t require advanced design knowledge to meaningfully contribute to the conversation or offer feedback.

This makes low-fi mock-ups an effective tool for bringing your non-design stakeholders on board, getting their input, and ultimately securing buy-in early and often.

The results are in: If you want great end products and a streamlined design process, don’t count out your low-fi mock-ups.

Low-fidelity mock-ups are an essential part of the UX designer’s toolkit. While mock-ups represent an additional stage of development, they are not an expendable one. Although it may seem counterintuitive, including this extra step can actually save you time and money and improve your overall outcomes.

Get started today with Lucidspark. 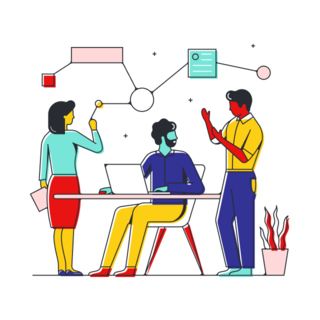 Now it’s your turn. Check out this article to learn how to build your own low-fidelity wireframes in Lucidspark.

The next step is to create your own low-fi wireframe in Lucidspark.