When the marketing team at EVBox decided to launch a new project to dive deeper into their customer journey flows, their top priority was making it a very collaborative process. With so many different teams involved before a lead is even passed to sales, the team was looking to adopt a more integrated approach to the entire customer journey.

Acquisition Marketing Manager Tom Smedes, UX Designer & Growth Marketer Justyna Krakowiak, and Ads Specialist Eszter Major started by organizing customer journey workshops. With all employees working remotely, they were searching for a tool that would allow them to collaborate and engage across teams without being in the same room.

“We can all chat over Zoom, but then just two people with the strongest voice keep talking, and it doesn't feel like there's any consensus on things at the end. So we knew that wouldn’t be a very good way to do it. We were looking for a tool where we can collaborate together, vote, and allow people to come back to the board later on and see what happened during the workshop in a nice visual.”

While Justyna had tried tools like Miro and Stormboard in the past, EVBox was already using Lucidchart. To keep things simple and maintain all their documentation in one place, the team decided to stay within the Lucid suite. They chose Lucidspark as their virtual, collaborative workspace—and they quickly realized the product checked all their boxes.

Armed with Lucidspark, Justyna and Tom felt prepared to take on their virtual workshops. They held multiple four-hour workshops with 20-30 people from marketing and sales. Justyna created a template to help structure the meetings and keep the board organized. She had initially mapped out the user journey in Lucidchart, and she was able to save herself the hassle of recreating this work by importing her Lucidchart content into the new Lucidspark board. 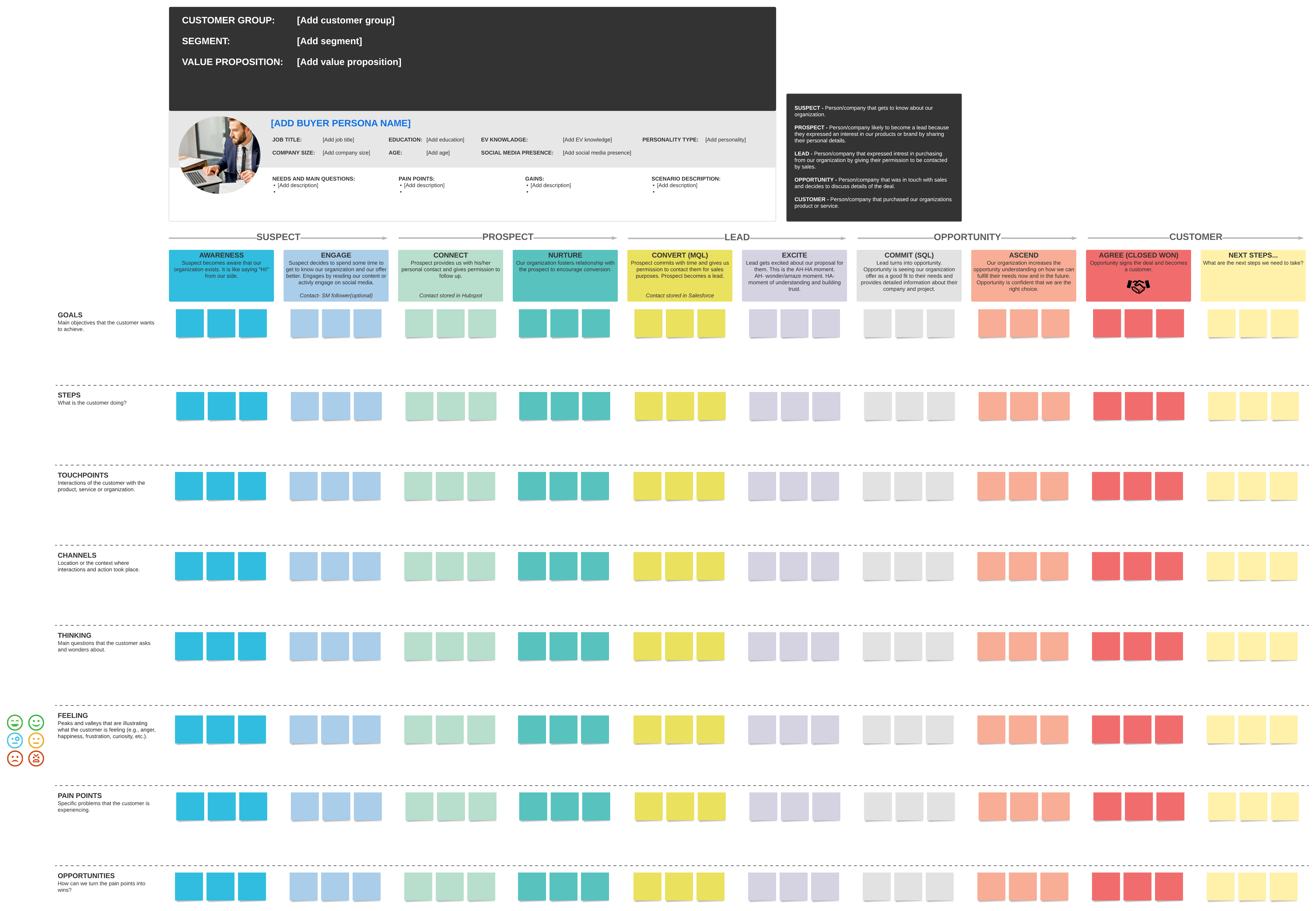 Each workshop began with Justyna presenting an overview of the persona they were focusing on for this project. Then the group worked on the Lucidspark board together in real time to outline the customer journey for this persona step by step. By collaborating across teams, they identified customer goals, channels, thoughts, and emotions at each stage.

As the teams worked through this exercise in a shared space, they were able to identify opportunities to better align their marketing teams. While everyone was working towards the same goal of creating leads, silos had appeared as each team worked towards this goal in a different way. With everyone contributing on a shared visual workspace, they were able to visualize what they were currently doing and identify gaps so they could synchronize their collective efforts. Eszter describes, "The customer journey blueprint we created helped us to connect the dots together. For the first time, we saw all the things the team is working on laid down in front of us.’’

Justyna appreciated how easy it was for everyone to have access to the board throughout the meeting. “I think the main benefit is that everybody is able to have access to their own board so you don't have to share a screen during the workshops. Everybody can zoom in and out, depending what size of screen they have at home. But people were also able to see where I was working. If they were really lost, they could choose to follow me on the board. That was nice because people have their own pace of doing things.”

The team also found great value in the ability to have moments of what Justyna calls “working together but alone.” Sometimes collaboration was lively and dynamic, but the team also took time to work quietly and add items to the board individually. When given the time to think and contribute anonymously, Justyna found that people who might not normally speak up in a meeting had the opportunity to contribute insightful ideas.

After working together to understand the basic customer journey, Justyna then broke the team into breakout rooms, making sure to group representatives from different teams together. Each group worked in Lucidspark to outline the steps and touchpoints involved in the customer journey and brainstorm opportunities for optimizing the customer journey.

Eszter was pleased with the ease of use. “We conducted breakout rooms during the workshops, so we needed a tool that is easy to understand. One of the advantages of Lucidspark is that it’s very intuitive and familiar.’’

The EVBox team found they were better able to generate ideas because work could be done synchronously and asynchronously. Justyna describes, “Sometimes if the call was getting a bit long and people were tired, we’d say. ‘You know what, take a break, sleep on it, and then just add things to the board later on.’ Back in the day if you did a workshop, it all had to happen during that workshop. Now you can split it up, which is important because people’s ideas come at different moments.”

Conducting these breakout sessions allowed the board to stay more organized throughout the working session. The timer kept everyone on pace, especially since they had so many stages to work through and Justyna couldn’t be facilitating every individual breakout.

At the end of the breakouts, each team presented their ideas to the rest of the group, providing helpful context around the thought process behind them. Ideas were gathered together on the main board as they went.

In the future, the team will be able to use Lucidspark’s newly released Breakout Boards to easily facilitate this small group work. Collaborators can choose a Breakout Board to join, which will send them to a separate Lucidspark board to work on with their smaller team. Then everyone can easily navigate back to the main board to synthesize their collective ideas together.

In Tom’s opinion, Lucidspark’s strongest benefit is how easily the product facilitates effective collaboration, regardless of the circumstances.

“Working remotely, it’s hard to collaborate. Lucidspark helped us look at the same board and shape the customer journey. It’s hard to do that virtually without a tool like Lucidspark.”

After gathering everyone’s collective ideas, the team was able to organize and prioritize those ideas to ensure the project kept moving forward. This portion of the workshop was facilitated by a combination of Lucidspark’s traditional voting feature and the use of emoji reactions, which helped spotlight next steps. Justyna described the benefit of combining the two features.

“I think the voting is definitely very important and it's nice that you can get a report from voting to look at later on and hold multiple rounds of voting. But I also really like the simple use of emoji reactions because you don't always know exactly why people vote the way they do. The emojis help with that because they’re connected with the emotion. They were a nice feature that I don't remember having in whiteboarding tools that I tried before.”

After surfacing the most popular ideas, a smaller team went through and scored the ideas based on popularity and feasibility to determine the top 30, which were then compiled into a polished campaign overview in Lucidspark. Another round of voting on this overview resulted in clear action items for the team to start on. Justyna also plans to create an overview of the full user journey that combines all the insights from these workshops.

Justyna described the benefit of using Lucidspark for this synthesis process: “I think in comparison to a normal workshops, Lucidspark definitely saves time in analyzing what happened because you don't have just a tons of stickies that you took photos of when you're trying to figure out where to go next.”

Tom agreed on the time savings and efficiency Lucidspark provides.

“Using Lucidspark allows you to have something documented to continue to use throughout the project. You can start with initial sketches and ideas and then turn those into much more. It makes you more efficient and reduces the number of follow-up meetings and follow-up work.”

The EVBox team now has a clear path forward as they look to optimize the customer journey and reach new users. And they have confidence that their team can collaborate successfully to move forward and generate brilliant ideas—regardless of whether they’re together or apart. 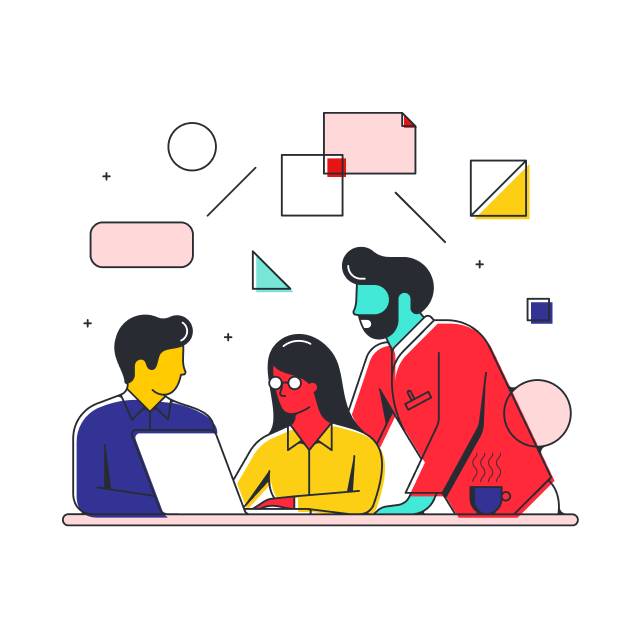 Elevate the way your team collaborates with Lucidspark.

Elevate the way your team collaborates with Lucidspark.